One day all the employees reached the office and they saw a big advice on the door on which it was written: “Yesterday the person who has been hindering your growth in this company passed away. We invite you to join the funeral in the room that has been prepared in the gym”.  In the beginning, they all got sad for the death of one of their colleagues, but after a while they started getting curious to know who was that man who hindered the growth of his colleagues and the company itself. 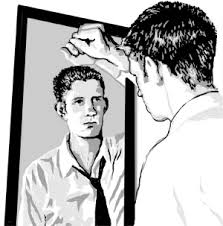 The excitement in the gym was such that security agents were ordered to control the crowd within the room. The more people reached the coffin, the more the excitement heated up. Everyone thought: “Who is this guy who was hindering my progress? Well, at least he died!”  One by one the thrilled employees got closer to the coffin, and when they looked inside it they suddenly became speechless.  They stood nearby the coffin, shocked and in silence, as if someone had touched the deepest part of their soul. There was a mirror inside the coffin: everyone who looked inside it could see himself.

Moral: The world is like a mirror: it gives back to anyone the reflection of the thoughts in which one has strongly believed. The world and your reality are like mirrors lying in a coffin, which show to any individual the death of his divine capability to imagine and create his happiness and his success. It’s the way you face Life that makes the difference.

A water bearer in India had two large pots, each hung on each end of a pole which he carried across his neck. One of the pots had a crack in it, and while the other pot was perfect and always delivered a full portion of water at the end of the long walk from the stream to the master’s house, the cracked pot arrived only half full.

For a full two years this went on daily, with the bearer delivering only one and a half pots full of water in his master’s house. Of course, the perfect pot was proud of its accomplishments, perfect to the end for which it was made. But the poor cracked pot was ashamed of its own imperfection, and miserable that it was able to accomplish only half of what it had been made to do.

After two years of what it perceived to be a bitter failure, it spoke to the water bearer one day by the stream. “I am ashamed of myself, and I want to apologize to you. “Why?” asked the bearer. “What are you ashamed of?” “I have been able, for these past two years, to deliver only half my load because this crack in my side causes water to leak out all the way back to your master’s house. Because of my flaws, you have to do all of this work, and you don’t get full value from your efforts,” the pot said.

The water bearer felt sorry for the old cracked pot, and in his compassion he said, “As we return to the master’s house, I want you to notice the beautiful flowers along the path.” Indeed, as they went up the hill, the old cracked pot took notice of the sun warming the beautiful wild flowers on the side of the path, and this cheered it somewhat. But at the end of the trail, it still felt bad because it had leaked out half its load, and so again it apologized to the bearer for its failure.

The bearer said to the pot, “Did you notice that there were flowers only on your side of your path, but not on the other pot’s side? That’s because I have always known about your flaw, and I took advantage of it. I planted flower seeds on your side of the path, and every day while we walk back from the stream, you’ve watered them. For two years I have been able to pick these beautiful flowers to decorate my master’s table. Without you being just the way you are, he would not have this beauty to grace his house.”

Moral: Each of us has our own unique flaws.  We’re all cracked pots.  In this world, nothing goes to waste.  You may think like the cracked pot that you are inefficient or useless in certain areas of your life, but somehow these flaws can turn out to be a blessing in disguise.”